Feel free to contact our service team if you need further assistance: Contact options MaltaExcursion.com
Booking date:
Coupon:
i
Enter your coupon code or discount code here.
Participants
i
Enter the number of participants. The number of persons specified is decisive for participation in the services.
Your selection
Age of the
participants
Price for next selection
Age: 15+
163 € p.P.
Age: 4 - 14
139 € p.P.
Age: under 3
0 € p.P.
Additional services
i
You can also add the following services. The selection is optional.
Your selection
Service
Price for next selection
Transfer
+50 €
%
Transfer from and to your accommodation
Required fields
i
These fields are mandatory. The selection is automatic.
1st child
0 €
Family plan: When two adults are travelling together, the first two children (4 years till under 14 years), travel free except for the port service charge, fuel surcharge and local transport (if required).
2nd child
0 €
%
from 4 persons 20 € per person

Family plan: When two adults are travelling together, the first two children (4 years till under 14 years), travel free except for the port service charge, fuel surcharge and local transport (if required). 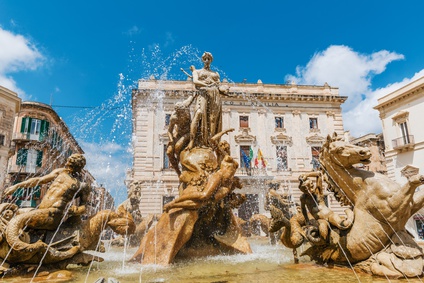 © XtravaganT Fotolia.com
Day tour from Malta to visit Syracuse, Marzamemi and Noto in Sicily.
Travel times:
i
If you book a transfer, the start time will change slightly depending on where your accommodation is located. You will receive the notification after finalizing your booking. Notes on travel times
Start:
Duration:
Finish:
5:45 AM
15 - 17 hours
23:00 PM
Included:

Ferry from Malta to Sicily and back

All transfers in Sicily (air-conditioned coaches)

Visit of Marzamemi, Noto and Syracuse
Not included:

Syracuse
Description:
This is a cultural, historical and gastronomic tour to Sicily´s eastern coast including Marzamemi, Noto and Syracuse.
+ show all
Marzamemi - Just 45 minutes away from Pozzallo is the quaintest fishing village you can come across – Marzamemi.The rows of colourful one story fishermen’s houses are interrupted by the Tonnara, the disused tuna processing plant. The original was built by the Arabs in the X Century. Palazzo Principe Villadorata and the Chiesa di San Francesco di Paola tower over the fisherman’s houses. The central Piazza Regina Margherita is everyone’s meeting place. The village is a sea of colour, the bright blue doors and windows, the potted red geraniums, the multicoulored wooden fishing boats, all against a background of the blue Mediterranean Sea. If you like Sicilian delicacies visit Campisi, the traditional delicacy, bottarga, the dried tuna roe has changed very little since Arab-Phoenician times. Syracuse - is one of the loveliest cities in Sicily. We tend to forget that it was once the most important city in Western Europe. The city owes its origin to the Greek settlers who, from 733 BC onwards, turned Sicily into Magna Graecia, when Greece ruled not only the Mediterranean but also the known world. Ortigia - Ancient Syracuse, is in fact an island, now joined to the mainland by a short bridge. It is the heart and soul of Syracuse, where the Greeks, for reasons of defense, decided to found their new city.Ortygia was in recent years given a face lift and is attracting more and more visitors. Piazza Duomo - at the centre of Ortygia is the Piazza Duomo, with the Duomo taking pride of place. The Duomo is unique, no other word for it. It was built by the Greeks as the Temple of Athena. When the Byzantines conquered Syracuse, instead of demolishing the temple, as so often happened, they converted it into a Christian church.The Normans modified the interior and built a more Christian façade. When the façade was destroyed in the 1693 earthquake the baroque façade which we see today was erected.The Duomo, one of the oldest sites of continued worship in the world is uniquely an example of Greek, Byzantine, Norman and Baroque architecture all in one. Noto – a UNESCO World Heritage Site, and now an essential part of any cultural tour of Sicily is only 35 minutes from the port of Pozzallo. Noto, known as il Capitale del barocco siciliano was all but forgotten until the catastrophic collapse of the Duomo in 1996, after years of neglect and a national and ultimately an international outcry. Rosario Gagliardi, the leading Sicilian Baroque architect of his time designed the cathedral but delays in construction led to numerous modifications and what we see today is the design on completion of the building in 1776, under the supervision of Bernardo Labisi. The Duomo was reopened to the public in 2007. Noto Antica, like the rest of surrounding region of South Western Sicily was devastated by the earthquake of 1693. The new Noto was built on a plateau about 8 km to the south of the city because the town planners wanted to achieve perfect symmetry. The town centre is built on a grid system, consists of one straight street, Corso Vittorio Emanuele, with three elegant piazzas.
Additional information and instructions:
This excursion may only be held with a minimum of 15 passengers. The itinerary of this excursion may be altered subject to weather conditions. The Company reserves the right to introduce a fuel surcharge from time to time without prior notice. Virtu Ferries Conditions of Carriage apply. These conditions may be viewed at Virtu Ferries offices or www.virtuferries.com and authorized travel agents. Covid-19 regulations: To travel you need to have the certificate with booster.
Customer reviews: